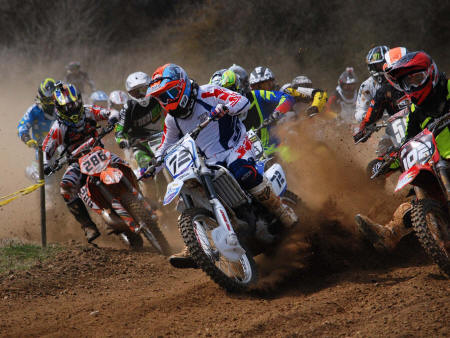 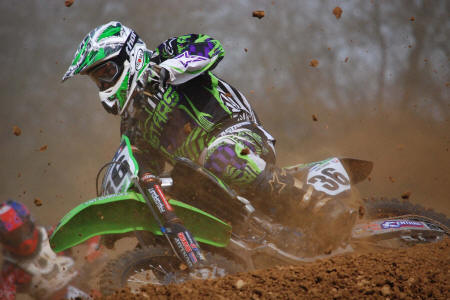 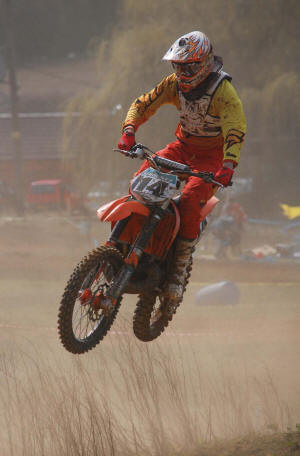 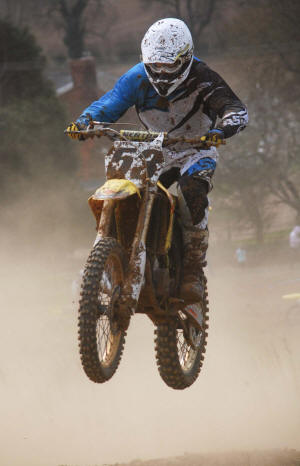 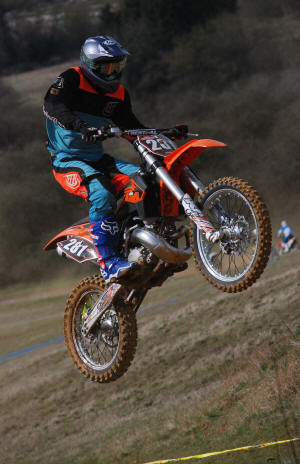 7 days was all it took to transform the popular Daventry circuit from a rain abandoned winter practise session to a full on dry and hard packed summer motocross meeting. With spring finally here it was time to get the South Midland Centre Championships underway, and a larger than average entry enjoyed a bright sunny day. The full gates and enthusiasm of all concerned certainly bode well for what looks like being an epic season.

James Russell returned to the SMC Championship in fine style, taking 3 straight wins in the Expert class. At various times during the day he was challenged hard by Dale Raynor, Michael McClurg and Jordan Wright but held of all advances to win round one. Jordan Wright put on a show for two stroke fans showing amazing speed on his 250 KTM, Michael McClurg was fast all day but suffered a few mishaps along the way and Dale Raynor sadly exited from race three with a suspected broken leg.

In the Junior A class it was all change at the front in both legs. Ben Jeffs came out on top in the points after a first leg third and a win in race two. Jordan Hughes won the first but had to settle for third overall after 5th in race two. Tying on points with him but taking second overall by virtue of the last race position, was Michael Austin with a second and a third.

In the Junior B class final race winner Danny Boylan took the overall by a single point from Marc Wood, despite a sixth in race one. Marc Wood's races were more consistent, improving on a first race fourth by moving up to second in race two. Richard Lowe had to settle for third overall after a bad start in the final race.

The Premier and Elite classes for riders over 40 go from strength to strength in the SMC, with both classes over subscribed at round one. With laptimes at the front matching those of the Junior A class age is clearly no indication of speed. All three wins in the Premier O40 class went to Ryan Griffiths, with Cliff Lester second each time out. Current SMC Premier class champion Tony Leishman came out best in a close battle for third place with Mark Bland. Recently promoted to the Elite O50 class, Richard Wright took full advantage of this to win all three races, ahead of Reg Willis who edged Sam Boak out of second by a single point. Despite finishing second in the two final legs,  Nigel Miller finished lower down the order after a mix up of the race order saw him miss the first encounter.

Jordan Wright carried his pace from the Expert class into the the Under 40 and Two Stroke classes winning races one and three, but issues in race two saw him finish further down the leader board. Some of his fellow Expert riders also decided not to participate in all three legs of the Under 40 class, which left consistent finishing Tom Parkes ideally placed to take the overall win. Enduro supremo Jack Lee finished in seocnd place just a point behind, with Declan Philips on the final step of the podium. In the Two Stroke class Mark Bland managed to turn the tables on his close adversary from the Premier class Tony Leishman. This time it was Mark that finished in front for the win from Tony, with Jack Lee in third. Hayley Rilings took full advantage of the handicapped start in the Workers race to build up an unassailable lead. Despite doing his best to catch her, her sheer pace on the track was too much for Ryan Griffiths who had to settle for second.